The château offers five tour routes including the State Apartments and the Hall of Mirrors, the Chapel and the 17th century galleries, the Museum of French History, the Apartments of the Dauphin and Dauphine and the Apartments of Mesdames, daughters of Louis XV. It is advisable to continue the tour by walking through the gardens and groves. A tour of the Châteaux de Trianon and the Estate of Marie Antoinette is a real must when visiting the area.

The Grand Trianon, built by Jules Hardouin Mansart in 1687, is perhaps the finest set of buildings in the whole Estate of Versailles. Napoleon Bonaparte, after organising the Restoration, made several visits there with his second wife Empress Marie Louise. The current layout is very close to that of the First Empire.

The Emperor’s Small Apartment: Napoleon occupied it for the first time in December 1809, in the days following his divorce from Josephine.

The Museum of French History

The Battles Gallery: thirty-three monumental paintings recount the military epic of France, from Tolbiac in 496 to Wagram in 1809.

The 1792 Room: devoted to this pivotal year of the French Revolution, there are also portraits of Bonaparte and young officers who would become generals and marshals of the Consulate and the Empire.

The Coronation Room: a décor for the glory of the Empire enhanced by two paintings by David, The Coronation Of Napoleon and The Army takes an Oath to the Emperor after the Distribution of Eagles. Also, two portraits of Napoleon, one young as a General, the other in his coronation robes, accompanied by those of his two wives, Josephine de Beauharnais and Marie-Louise von Habsburg.


Focus on the Family

While exploring the apartments, the Opera and the Chapel, you will discover architecture and décor of unimaginable beauty. The Hall of Mirrors is a delight. Covered with a thousand majestic mirrors and chandeliers, the room was decorated in this way to allow the King to see his whole reflection, a real luxury at the time!

Also, do not miss the Queen's Bed Chamber, which has remained intact since her departure at the time of the French Revolution. And to enjoy the same luxury outdoors, stroll through the château gardens designed by Le Nôtre. Fountains, tree groves, topiaries and sculptures adorn this immense promenade area. Then go and explore the Estate of Marie Antoinette, a true refuge and a soothing place where nature, refinement and femininity combine.

Petit Trianon/Estate of Marie Antoinette: for children go and visit the Queen's hamlet and educational animal farm. Interactive Tour at the heart of the tree groves in virtual reality and discovery of the gardens in a fun way – free application for Iphone and Android. In the park: the little train, Bicycle rental for children and adults, boating on the Grand Canal. In the gardens attend the Musical Fountains Show (from March to October) and the Fountains Night Show (from June to September).

Pushchairs and baby carriers with metal frames are not allowed in the rooms of the Château de Versailles and the Châteaux de Trianon. Remember to bring a kangaroo bag or baby carrier without a metal frame for carrying children. Left-luggage office for pushchairs.

Bulk ticket purchases in advance (discounts from 5 to 15% based on the number). Free audio guide in 11 languages. Tours for independent groups with tour routes to choose from. Guided tours in French and English for individuals (booking on-line available). Guided tours in French, English and other languages on request for groups (reservation required). Restaurants: The Grand Café d’Orléans, La Flottille, La Petite Venise and Angélina. Special access for disabled people. One year Subscription to Versailles. Sales manual available on the Internet.

the Musical Fountains Show and the Fountains Night Show

Free
Free for people with disabilities with justification 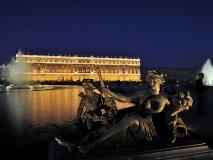 As night falls, the Royal Garden of Louis XIV becomes a land of astonishing sights and sounds.

Every year at the Château de Versailles you can come and discover almost 80 baroque and classical music shows in all their different forms including staged opera, various concerts, sacred music, (...)